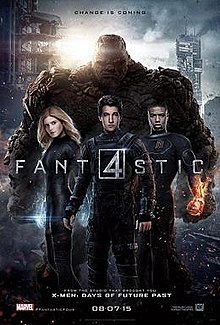 Miles Teller as Reed Richards / Mr. Fantastic: Richards has been exploring the universe in his garage after school. After being transformed by one of his experiments, he gains the ability to stretch his body into different forms and lengths. Teller said of the role, «When I read the script, I didn’t feel like I was reading this larger-than-life, incredible superhero tale. These are all very human people that end up having to become, I guess, what is known as the Fantastic Four. So for me it was just a really good story and gives me an opportunity to play something different from my own skin.» Owen Judge portrays Reed as a child while Fernando Rivera portrays Reed in disguise.
Michael B. Jordan as Johnny Storm / Human Torch: A troublemaker, thrill-seeker and the younger brother of Susan Storm, he has the ability to shoot fireballs and fly. Jordan said of the cast, «We’re more or less a bunch of kids that had an accident and we have disabilities now that we have to cope with, and try to find a life afterwards – try to be as normal as we can.» Jordan previously worked with Trank on 22’s Chronicle, and according to Trank, Jordan’s character in Chronicle shares characteristics with Johnny Storm. Trank has described Storm as «smart, hilarious and charismatic.»
Kate Mara as Sue Storm / Invisible Woman: Brilliant, independent, and sarcastic, Storm has the ability to become invisible and generate force-fields. Mara has said that she intended to focus on making her character «as real as possible». Trank has described Storm as «smart, dignified and [with] integrity.»
Jamie Bell as Ben Grimm / The Thing: Warm, sensitive, a loyal and protective friend, Grimm’s stone body gives him super-strength and makes him «indestructible». Trank said Grimm grew up an alienated child in a «tough» neighborhood. Trank also said that Bell has «qualities» of warmth and strength which people would want to see from Grimm. Bell has said that Grimm is the «heart of the group [Fantastic Four]». In preparation for the motion-capture performance, Bell approached actor Andy Serkis for advice. During filming, he wore a tracking suit and stilts to match the height and eye-line of The Thing. Evan Hannemann portrays Grimm as a child.
Toby Kebbell as Victor Von Doom / Dr. Doom: A computer technician and computer scientist who is mentored by Dr. Franklin Storm. Doom finds a new father of sorts in Storm. Angry, vengeful, and bright, Doom was changed in the Negative Zone, as were the other characters. Kebbell said that he concentrated the most on the voice of the character, adding, «on the animated series, they never got his voice what I imagined it to be when I read the comics as a little boy. What I spent the majority of my time doing was not just being a fan, but being a bit of pedant and making sure I got exactly what I always wanted to see.» Kinberg said that Doom is as central to the film as the «titular» heroes. He added that Doom has «aspirations and struggles that are a little bit more classically tragic than the other characters» and that the film would show how he becomes a villain. Dr. Doom’s full name in this film was originally going to be «Victor Domashev», but after backlash by fans, it was changed back to «Victor von Doom» during reshoots, to match his name in the Marvel Comics universe.
Reg E. Cathey as Dr. Franklin Storm: The biological father of Johnny and adoptive father to Sue. Cathey described Franklin as a «brilliant scientist who has achieved much more than he thought he would» and that Franklin’s main drive in life is to help «brilliant» kids who may have been dropped through the cracks or who were misunderstood.
Tim Blake Nelson as Dr. Harvey Allen: A scientist who works for the government, and takes part in training the members of the team to hone their abilities. Nelson said that Allen is «responsible for what the creative people do that he has to rein them in and discipline them.»
Additionally, Dan Castellaneta portrays Mr. Kenny, Reed’s teacher and Tim Heidecker appears as Mr. Richards, Reed’s stepfather. Chet Hanks, son of actor Tom Hanks, appears as Jimmy Grimm, Ben Grimm’s older brother.

Childhood friends Reed Richards and Ben Grimm have worked together on a prototype teleporter since youth, eventually attracting the attention of Professor Franklin Storm, director of the Baxter Foundation, a government-sponsored research institute for young prodigies. Reed is recruited to join them and aid Storm’s children, scientist Sue Storm and engineer Johnny Storm, into completing a «Quantum Gate» designed by Storm’s protégé Victor Von Doom.

The experiment is successful, and the facility’s supervisor, Dr. Allen, plans to send a group from NASA to venture into a parallel dimension known as «Planet Zero». Disappointed at being denied the chance to join the expedition, Reed, Johnny and Victor along with Ben use the Quantum Gate to embark on an unsanctioned voyage to Planet Zero, which they learn is a world filled with otherworldly substances. Victor attempts to touch the green lava-like substance, causing the ground they are standing on to erupt. Reed, Johnny and Ben return to their shuttle just as Sue brings them back to Earth and Victor is seemingly killed after he falls into the collapsing landscape. The Quantum Gate explodes, altering Reed, Sue, Johnny and Ben on a genetic level and granting them superhuman abilities beyond their control: Reed can stretch like rubber, Susan can become invisible and generate force fields, Johnny can engulf his entire body in fire and fly, and Ben develops a rock-like hide which gives him superhuman strength and durability. They are then placed in government custody to be studied and have their abilities tested. Blaming himself for the accident, Reed escapes from the facility and tries to find a cure for their changes.

One year later in 25, Reed is now a fugitive and has built a suit that helps him control his ability. Hiding in Central America, he is eventually found by the United States military with Sue’s help and captured by Ben, who has become a military asset along with Johnny and Sue. Johnny and Sue have been outfitted with specialized suits designed to help them control their abilities. Reed is brought to Area 57, where Dr. Allen conscripts him into rebuilding the Quantum Gate in exchange for giving Reed the resources to find a cure. Arriving in Planet Zero, Dr. Allen’s explorers find Victor, who has been fused to his spacesuit and now possesses telekinetic abilities, and bring him back to Earth. Believing that humans need to be destroyed so he can rebuild Earth in his image, Victor kills the scientists and soldiers in the base, including Dr. Allen and Professor Storm, and returns to Planet Zero using the Quantum Gate, with Ben, Johnny, Reed and Sue in pursuit.

Now dubbing himself «Doom», Victor activates a portal on Planet Zero using the Quantum Gate and begins consuming the landscape of the Earth using a structure he created from the rock formations in Planet Zero. He is confronted by the four and, after a short battle, Ben punches Doom into the portal’s energy beam, disintegrating him while Johnny closes the portal. Returning to Earth, the group is rewarded by the US military for their heroics by being given a new base of operations known as «Central City» to study their abilities without government interference. They decide to use their powers to help people and adopt the mantle of the «Fantastic Four».
When will the full movie come out online?
Release date: 2022 year