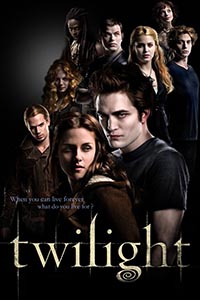 Kristen Stewart was on the set of Adventureland when Hardwicke visited her for an informal screen test, which «captivated» the director. Hardwicke did not initially choose Robert Pattinson for the role of Edward Cullen; but, after an audition at her home with Stewart, he was selected. Meyer allowed Pattinson to view a manuscript of the unfinished Midnight Sun, which chronicles the events in Twilight from Edward’s point of view. Meyer was «excited» and «ecstatic» in response to the casting of the two main characters. She had expressed interest in having Emily Browning and Henry Cavill cast as Bella and Edward, respectively, prior to pre-production.

Peter Facinelli was not originally cast as Carlisle Cullen: «[Hardwicke] liked [him], but there was another actor that the studio was pushing for.» For unknown reasons, that actor was not able to play the part, and Facinelli was selected in his place. The choice of Ashley Greene to portray Alice Cullen was criticized by some fans because Greene is 7 inches (18 cm) taller than her character as described in the novel. Meyer said that Rachael Leigh Cook resembled her vision of Alice. Nikki Reed, who portrayed Rosalie Hale, had previously worked with Hardwicke on the successful Thirteen (2003), which they co-wrote, and Lords of Dogtown (2005).

Kellan Lutz was in Africa, shooting the HBO miniseries Generation Kill, when the auditions for the character of Emmett Cullen were conducted. The role had already been cast by the time the HBO production ended in December 2007, but the selected actor «fell through.» Lutz subsequently auditioned and was flown to Oregon, where Hardwicke personally chose him.

Rachelle Lefèvre wanted a role in the film because Hardwicke was director; she saw «the potential to explore a character, hopefully, over three films;» and she wanted to portray a vampire. «[She] thought that vampires were basically the best metaphor for human anxiety and questions about being alive.» Christian Serratos initially auditioned for Jessica Stanley, but she «fell totally in love with Angela» after reading the books and took advantage of a later opportunity to audition for Angela Weber. The role of Jessica Stanley went to Anna Kendrick, who got the part after two mix-and-match auditions with various actors.

Because of major physical changes that occur in the character of Jacob Black between Twilight and New Moon, director Chris Weitz considered replacing Taylor Lautner in the sequel with an actor who could more accurately portray «the new, larger Jacob Black.» Trying to keep the role, Lautner worked out extensively and put on 30 lbs. In January 2009, Weitz and Summit Entertainment announced that Lautner would continue as Jacob in The Twilight Saga: New Moon.

In late March 2009, Summit Entertainment released a list of the actors who would be portraying the «wolf pack» alongside Lautner. The casting for the rest of the Quileute people was headed by casting director Rene Haynes, who has worked on films with large Native American casts, such as Dances with Wolves and Bury My Heart at Wounded Knee.

In mid-2009, it was announced that Bryce Dallas Howard would be replacing Rachelle Lefevre as Victoria for the third Twilight film, The Twilight Saga: Eclipse. Summit Entertainment attributed the change to scheduling conflicts. Lefevre said she was «stunned» and «greatly saddened» by the decision. Jodelle Ferland was cast as the newly turned vampire, Bree. Other new cast members for the third film include Xavier Samuel as Riley, Jack Huston as Royce King II, Catalina Sandino Moreno as Maria, Julia Jones as Leah Clearwater, and Booboo Stewart as Seth Clearwater.

Twilight was in development for approximately three years at Paramount Pictures’s MTV Films, during which time a screen adaptation differing significantly from the novel was written. For example, the script transformed Bella into a star athlete.

Stephenie Meyer stated that there was some debate in allowing the movie to be made because of the negative or positive outcome of the movie compared to the book, ‘»They could have put that [earlier] movie out, called it something else, and no one would have known it was Twilight!» The idea of seeing a scene converted correctly, specifically the meadow scene, convinced Meyer to sell the rights. In seeing the script, she was frightened that she had made the wrong decision. When Summit Entertainment reinvented itself as a full-service studio in April 2007, it successfully acquired the rights to the novel. Erik Feig, President of Production at Summit Entertainment, guaranteed a close adaptation to the book. The company perceived the film as an opportunity to launch a franchise based on the success of Meyer’s book and its sequels. Meyer felt that Summit was open to letting her be a part of the film. Catherine Hardwicke was hired to direct the film, and soon afterward, Melissa Rosenberg was selected to be the film’s structural base as the writer of the film.

Rosenberg developed an outline by the end of August and collaborated with Hardwicke on writing the screenplay during the following month. «She was a great sounding board and had all sorts of brilliant ideas…. I’d finish off scenes and send them to her, and get back her notes.» Because of the impending WGA strike, Rosenberg worked full-time to finish the screenplay before October 3. In adapting the novel for the screen, she «had to condense a great deal.» Some characters were left out, and others were combined. «[O]ur intent all along was to stay true to the book,» Rosenberg explained, «and it has to do less with adapting it word for word and more with making sure the characters’ arcs and emotional journeys are the same.» Hardwicke suggested the use of voice over to convey the protagonist’s internal dialogue, since the novel is told from Bella’s point of view; and she sketched some of the storyboards during pre-production.

Meyer, the author, and Hardwicke, the director, had a close relationship while developing Twilight. Hardwicke wanted to embrace the experience and make the characters in the books come to life. She would call Meyer after changing a scene slightly, which surprised the author because, «I’ve heard the stories…I know it’s not normally like that when you adapt a book.» Meyer, a natural pessimist, was waiting for the worst but, instead, called her experience in the book’s film adaptation «the best I could have hoped for.»

Originally scheduled for release in December 2008, Twilight was moved to a worldwide release of November 21, 2008, after Harry Potter and the Half-Blood Prince moved from a November 28 release to being released in July 2009.
When will the full movie come out online?
Release date: 2022 year